My Precious: Gold makes a comeback 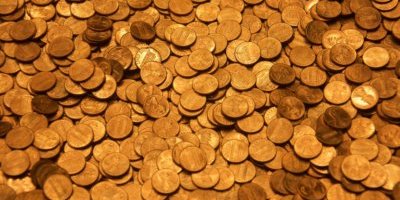 An interesting trend has emerged out of the depths of the current crisis: Gold has made a stunning comeback. Recently it surpassed $2000 for the first time in history[1] after languishing for much of the past decade. Right now, gold is the consensus trade in portfolios.

This trend goes hand in hand with another phrase which has recently been coined: “the debasement of the US Dollar”. In a few short months, gold has gone from zero to hero, and investors appear to be turning their backs on the dollar, the incumbent haven currency. Is it really the end of the US Dollar, and should we be worried now that gold is in favour? Below we explore the main drivers and look at what the numbers are implying for future investment returns.

But first a crash course in gold. Taking a step back, why would a precious metal act as the ultimate global haven currency? It sounds a bit archaic. Gold found favour in the Middle Ages to facilitate trade. Essentially it was seen as a precious commodity which held its value, was easy to divide into currency ‘units’, and it was relatively scarce which helped preserve its value. It created a stable and reliable basis for people to trade with each other.

Roll forward a few thousand years, and global economies were still basing their currencies on the gold standard, where the bank notes we term ‘money’ were backed by a minimum amount of gold bullion, locked up in a safe at the Central Banks. You could essentially cash in your ‘money’ and expect to be paid in gold. Only recently, in the early 1970’s, was gold abandoned as the underpin for currencies. Instead, we now have governments ‘promising’ that the bearer of the legal tender (i.e. your hard earned Rands or Dollars) can use the note to buy goods and services. Where in the past governments were limited in the amount of new money they could print, as they needed to buy gold to back it, since the 70’s they have been free to issue as much new money as they wish subject to their own financial decisions.

Gold remains a sought after, rare and trusted commodity, and as such it has an intrinsic value despite the fact there are no earnings or dividends paid. The cash we use to buy goods and services has no intrinsic value in itself, only in what it will buy for us. Modern money is worth only as much as the government which backs it. This gives gold the edge when trouble comes to town and investors question the value of the currency they hold.

Now that we have the ability to issue unlimited amounts of debt to fund our economies, we have taken the opportunity to do so. Global debt levels are at all time highs relative to the size of the global economy. The current COVID crisis drove the most aggressive period of debt issuance in history, where stimulus packages globally account for some $20Tn.

The more freely available money is, the less it is worth. This is the case with the US$, where the tipping point could have been reached over the past weeks where investors have sold dollars to buy gold, betting on a weaker US$ in the future, along with higher inflation.

To give an indication of who now owns the gold bars, where in the Middle Ages it was King Croesus of Lydia[2], it is now the average ETF investor, along with the central banks, as the chart below shows: 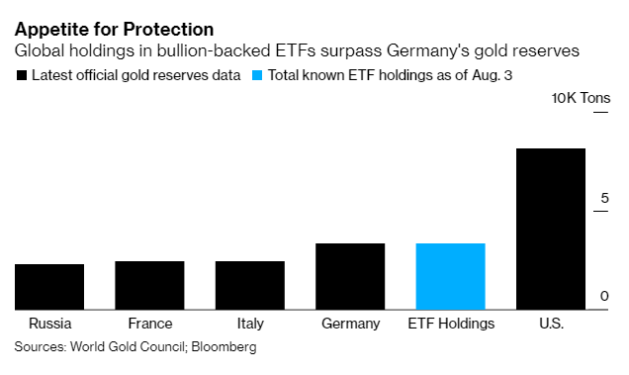 The key investment driver for this new ETF investor is an anxiety around future inflation, and devaluation of currency, as a result of huge debt issuance today.

We are far past the point of available gold stock being in proportion to the value of all financial assets, where it could potentially act as a back stop. We can create endless financial assets (like government bonds, cash itself, or even shares, structured products, derivatives and the like), without the hassle of needing to dig it out of the ground and store it in a vault.

With inflation anxiety rearing its head again, investors expect poor returns after inflation from holding currency type assets like the US$. This is best indicated by the relationship between 10-year US Inflation Linked Bonds, and the Gold Price. (see chart below). 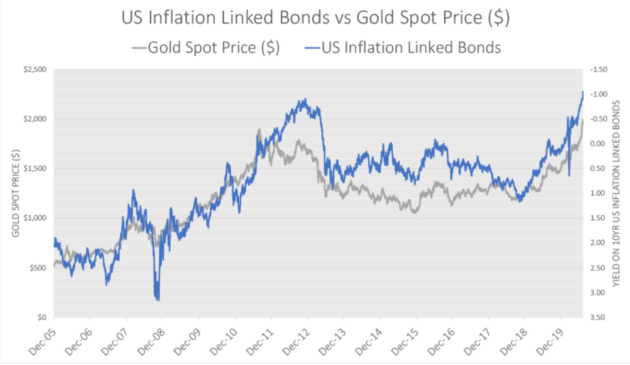 As you can see, the two correlate quite closely. The chart is telling us that the lower the return after inflation on US Government debt, the more investors move into gold. If there is money to be made in holding cash, then gold tends to lose its lustre and investors hold dollars instead. Investors are currently heading out and buying gold ETF’s, which tells us about where they think inflation is heading (up).

There are other factors which drive gold: its great in a crisis as investors see it as a store of value, and we have this feature at present. It has natural demand in the jewellery market as well, although not currently in demand given the global lockdown. Central Banks remain the other big investor.

So, is this a genuine ‘debasement of the dollar’, or rather a short-term shift of investor assets into gold by virtue of easy access to gold via ETF’s? Like the Central Banks pre-1971, exchange traded commodity funds are required to hold physical bullion to back the investment being made. The largest of the group is the SPDR Gold Shares fund, managed by State Street. It currently holds 1200 tonnes of gold on behalf of investors, stored at HSBC Bank.

What effect does the relatively small size of physical gold versus limitless financial assets have on supply and demand? When the outsized financial markets decide to buy gold, how much of the price is driven through lack of gold supply, and forced buying by exchange traded gold funds?

We are skeptical around both trends. For one, the US Dollar may be under pressure right now after a healthy period of resilient performance, and investors have got the “debt = inflation” story wrong before in the post-GFC period. Other global economies are also not exactly streaking ahead in the debt vs growth department either, so the competition is not obviously strong. At this point would we be calling for the end of the US Dollar as the world’s reserve currency?[3] No. Do they probably have too much debt? Absolutely. Will this cause future inflation and dollar depreciation? Most likely.

For the resurgent Gold Bugs, we can only hope that the ETF community is not fickle and holds onto its newly found precious metal. There may well be a fundamental driver for the gold price coming out of the higher inflation expectations, but this behavior does seem to have elements of short termism to it.

Lastly, is there an opportunity for local investors? Aside from the gold shares (we remain a significant miner, and gold shares have bailed out equity returns this year), a weak US$ can create some balance for emerging market investors who have struggled with the strong dollar for a long time now. We also have good real yields on income assets, and in a world where the US Dollar is no longer the haven currency it used to be, suddenly a slightly vulnerable but high yielding rand can look like an attractive proposition.

We hope you enjoyed this piece by Fund House.

[1] Bear in mind the historical values go back thousands of years, this comment is relating to the 100 or so years of priced data. The Middle Ages may well have seen higher levels.

[3] The US$ remains the most common foreign trade currency at 88% of all trade transactions, and 62% of global central bank reserves are also held in US$.

Let us help with your will and estate planning
June 2, 2020

Binary thinking, What-Ifs and why it helps to disagree with yourself
May 19, 2020