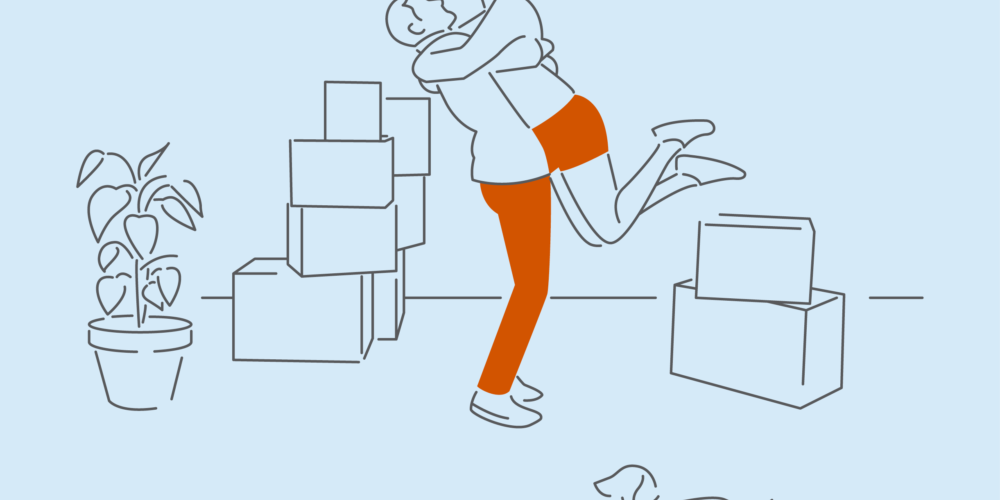 The concept of “emigration”, as recognised by the Financial Surveillance Department of the South African Reserve Bank (SARB), has been phased out, with effect 1 March 2021. National Treasury has indicated that the reason for this regulatory change is “to encourage South Africans to keep their ties with the country”.

The phasing out of emigration has created even more confusion around citizenship, exchange control (excon) residency and tax residency and how the changes will affect different individuals and access to funds. Carla Rossouw, tax lead, and Jaya Leibowitz, senior legal adviser, highlight the differences between these three concepts and explain how each may affect your investments.

A citizen is a legally recognised national of a state or commonwealth. In South Africa, you can be afforded citizenship in three ways: By birth, through descent, or via naturalisation. Citizenship status gives individuals certain rights and obligations, such as the right to vote, access to social services, and the right to live and work in the country without the need for a permit or visa.

Can you lose your South African citizenship?

It is important to remember that the concept of residency for excon purposes is distinct from tax residency, which is discussed in section 3.

The regulations previously created distinctions between the following individuals:

An individual or family unit intending to take up permanent residence outside of the CMA could apply to the SARB for financial emigration (or “formal emigration”), which would entitle the individual to take a specified amount of money out of South Africa via an emigrant capital account (also referred to as a rand-blocked account). A resident who followed this process would become an emigrant for excon purposes and would eventually become a non-resident.

The concept of emigration for excon purposes has now been phased out and the process of controlling an emigrant’s remaining assets via an emigrant capital account has fallen away.

However, the SARB and SARS have confirmed that if you submitted an emigration application to an authorised dealer prior to 1 March 2021, you will be able to follow the previous emigration process.

For more information on how much money you are allowed to transfer out of the country when you emigrate, please see “Taking money offshore” in section 3.

Declaring yourself a resident temporarily abroad

If you are living outside of South Africa on a temporary basis (i.e., you intend to eventually return to South Africa), and did not formally emigrate prior to 1 March 2021, you should consider declaring yourself a “resident temporarily abroad”.

The SARB allows individuals who have declared themselves as residents temporarily abroad to receive pension and annuity payments directly into their foreign bank accounts, as well as monetary gifts and loans from other South African excon residents. These payments are permitted in addition to the annual R1 million single discretionary allowance (SDA), which all South African residents (excluding those who have ceased to be South African tax residents) are entitled to, and the R10 million foreign capital allowance (FCA) described in section 3.

Countries use different rules or tests to determine when a person is considered a tax resident. As a result, you may qualify as a tax resident in more than one country simultaneously and therefore be subject to tax in those countries. The Organisation for Economic Co-operation and Development (OECD) has a website where most countries have set out their own tests for tax residency relating to individuals and legal entities. Click on the country that you are living in to see the criteria for tax residency in that country.

How to determine if you are a South African tax resident

Your intention is a subjective matter and if you claim to be ordinarily resident in a country, all your surrounding actions and circumstances must support this claim. Factors that will be evaluated include:

SARS Interpretation Note 3 (Issue 2) sets out the list of factors that will be taken into account to determine whether an individual is ordinarily resident for tax purposes in South Africa.

If you are not ordinarily resident in South Africa, you will still be considered a South African tax resident during a particular tax year if you have been inside South Africa for more than 91 days in that tax year, and each of the five preceding tax years, as well as for a total of more than 915 days in the preceding five years. This is referred to as the “physical presence” test.

Tax residency in more than one country

While it is possible to be a tax resident in more than one country, you can only be ordinarily resident for tax purposes in one country at a time.

Most countries enter into double taxation agreements (DTAs), which are contracts entered into between two tax jurisdictions to avoid double taxation of the same amount earned by the same person. A DTA will help you determine the country in which you are ordinarily resident and will explain which country is allowed to tax particular income, and which country must provide tax relief for the tax already paid in the other country. It is important to understand that South Africa has negotiated separate DTAs with each foreign jurisdiction, so the rules that apply will vary from country to country.

SARS maintains a list on their website of all the DTAs that they have concluded with other countries.

When will you cease to be a South African tax resident?

Since the 2018 tax year, the SARS personal income tax return has included a question that specifically asks whether you have “ceased to be a resident of South Africa during this year of assessment”.  The date on which you ceased to be a tax resident will need to be provided when completing this information. Alternatively, you can also inform SARS by submitting the “Declaration: Cease to be a Tax Resident” form, available via the SARS website, along with the relevant documents which SARS may require to support your declaration. It is important to be aware of the potential tax implications of ceasing to be a South African tax resident i.e., the Income Tax Act treats you as having disposed of all your assets (excluding South African fixed property and shares in South African companies that are property rich), which may result in a capital gains tax liability. This is often referred to as an “exit charge”.

The new “emigration”: Ceasing to be a tax resident from 1 March 2021

If you have followed the process to cease to be a South African tax resident, as described in section 2, new rules will apply regarding the assets that you can take out of the country.

Once you have obtained the TCS PIN and SARS has confirmed that you are tax compliant, you will be able to transfer up to R10 million of your assets offshore per year. You will not be entitled to use the annual SDA that is available to residents. However, in the year that you cease to be a tax resident, you will be allowed to transfer up to R1 million as a travel allowance without obtaining a TCS. In addition, household and personal effects up to an amount of R1 million per family unit may be taken out of the country under a SARS “Customs Declaration”, provided these assets have been declared on the relevant forms.

If you wish to transfer more than R10 million offshore, you will be subject to a more stringent verification process by SARS and will have to apply for approval from the Financial Surveillance Department (FSD). Before approving these transfers, SARS and the FSD will verify your tax status and the source of funds and you will be assessed in terms of the anti-money laundering and countering terror financing requirements.

Prior to 1 March 2021, SARS allowed individuals who formally emigrated from South Africa to access their retirement annuity and preservation fund savings prior to reaching retirement. These savings would be paid into the emigrant’s capital account and could then be taken offshore. This process will still apply if you submitted an emigration application before 28 February 2021, and your application is approved by the SARB on or before 28 February 2022.

If you leave South Africa when your work or visit visa expires, you will still be able to access your benefits in the same as before 1 March 2021.

Table 1 summarises how your retirement annuity and preservation fund benefits can be accessed after 1 March 2021. 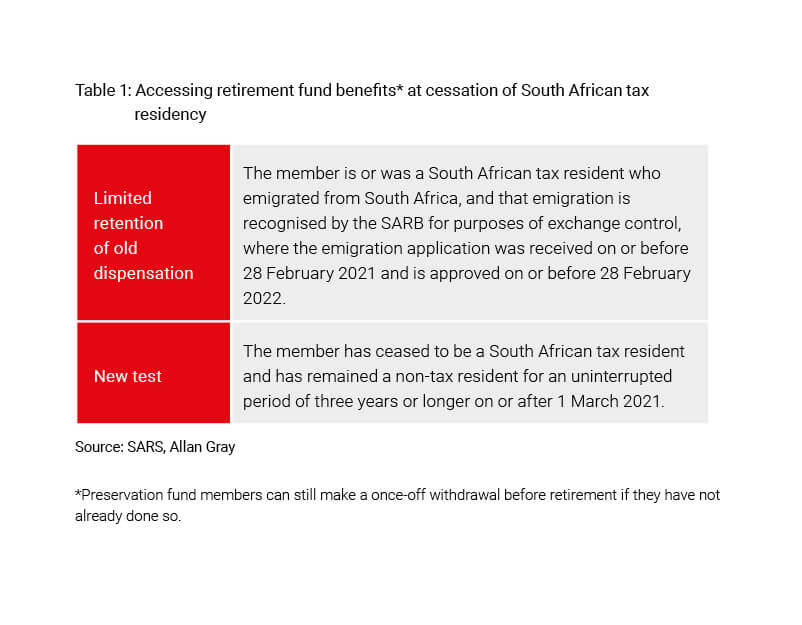 Why the emphasis on a three-year period?

The three-year requirement was the subject of much debate and consultation between industry and National Treasury. The SARB’s rationale for phasing out emigration was to make it easier to take money out of the country and to discourage people from cutting ties with South Africa. The three-year requirement adds a degree of permanency to a relocation abroad (in other words, it discourages those leaving South Africa for a short amount of time from withdrawing their retirement savings).

Ceasing to be a South African tax resident has a much lower compliance burden than the previous requirement to financially emigrate, which involved a lot of administration and time. National Treasury’s intention is to make it less burdensome for South Africans to access their retirement benefits on leaving the country.

How will the new test work in practice?

The industry has been working with SARS to formulate a suggested list of documentary evidence to substantiate that an individual 1) has ceased to be a South African tax resident and 2) has remained a non-tax resident for three consecutive years or longer.

If you want to fully withdraw your retirement benefit prior to retirement, you will need to provide us with the following information:

Once we have received these documents, we will apply for a tax directive on your behalf. It is important to note that the discretion to approve or reject the tax directive resides with SARS. This means that SARS may still reject the tax directive application if its internal records do not agree that you meet the requirements to withdraw your benefit. This can occur even if all the suggested supporting documents have been provided to SARS. For example, you many still be a South African resident on the SARS system. If this happens, you will need to engage with SARS directly to resolve the dispute, as this is outside our control.

Determining your residency for tax or excon purposes can become quite complicated and depends on your unique circumstances. We recommend that you seek advice from a South African tax or exchange control specialist if you are leaving or have left South Africa to live abroad, whether on a temporary or permanent basis.

Written by Carla Rossouw and Jaya Leibowitz of Allan Gray.

You can find the orignal article here, published on 3 August 2021:

The Impact of REIT structures on Listed Property Investing
March 30, 2021

GameStop, democratic investing and being caught by the mob
February 25, 2021
Go to Top