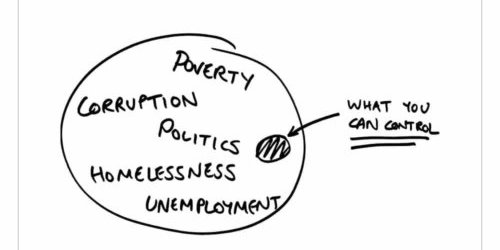 Here is a powerful piece by JP Landman, who consults to Nedgroup Private Wealth (Pty) Limited, which we found very encouraging. We hope that you enjoy it too.

Remember to keep in touch with us, we’re here to help where ever we can through this tough time!

The new coronavirus has knocked the stuffing out of the world’s economy. South Africa was in a recession even before the virus struck. Then came the (final) credit rating downgrades in March and April, and then the global lockdown. South Africa’s economy is now expected to contract somewhere between 6% and 8% in 2020.

Whatever the number, contraction means that unemployment goes up, poverty increases, inequality worsens, human development is undermined, and social cohesion frays. How do we deal with this?

FIRST, DEAL WITH THE CRISIS
Covid-19 has brought in its wake two crises − one humanitarian and the other economic. Emergency measures are needed to deal with both. The humanitarian crisis requires government to alleviate hardship, combat hunger and provide basic necessities. The economic crisis requires measures to keep a modicum of economic activity going to try and avoid falling off a 1929 depression cliff.

The successful American investor Ray Dalio has studied 48 debt crises around the world spanning the last 100 years, among them Germany’s Weimar Republic hyperinflation crisis and the American recession of 2008. He believes that Covid-19 has resulted in a fully fledged debt crisis that will trigger large-scale deleveraging. This is merely technical language for a proper recession − people lose their jobs; businesses go bankrupt; and hardship dominates the streets. We are seeing that globally.

Dalio (he wrote a book of 1 700 pages on his research and conclusions) distinguishes between a ‘beautiful deleveraging’ and an ‘ugly deleveraging’. It is ‘beautiful’ when the monetary and fiscal authorities ameliorate the recession and hardship with aggressive expansionary policies – higher spending and deficits, generous support from central banks, even money printing – again, precisely what we are seeing in the world today. An ‘ugly’ deleveraging is when these ameliorating actions are not taken or not taken in time or sufficiently. Then the hardship and social suffering intensify, and the economy stays in recession for longer – it becomes a depression. Recessions happen in both ‘beautiful’ and ‘ugly’ deleveraging. The difference is how long they last and how deep they go.

Last night the President announced an ameliorating package that, together with previous announcements, comes to R501 billion or 10% of GDP. Actually, not quite. R130 billion is already expenditure in the budget, which will be reprioritised. That leaves a fiscal stimulus of R370 billion or 7,4% of GDP – which is within the 6% to 8% range of the expected contraction in the economy this year.

How will this be financed? With R130 billion already in the budget and R41 billion financed from UIF surpluses, it leaves R330 billion. R200 billion of that will be a bank loan guarantee scheme between the SARB, Treasury and the commercial banks. The SARB will put up some capital and banks will do the leveraging. The cost to the taxpayer will be little (some say nil). A further R70 billion is deferred tax payments (VAT and PAYE), which will simply flow to Treasury a bit later. That leaves an actual funding shortfall of about R60 billion.

The BRICS New Development Bank (NDB) and the International Monetary Fund (IMF) have already said South Africa can access $5,2 billion between them – at about R18,50/$ that is more than R90 billion. The IMF loan comes with an interest rate of 1% and none of the feared conditionalities. Government has also approached the World Bank and African Development Bank. Servicing the debt will be for the taxpayer. The finance minister will table an adjustment budget in Parliament where we will see the details. But what is clear is that the 6,8% budget deficit envisaged in February will rise to more than 10%.

HAVING DEALT WITH THE CRISIS, DEAL WITH THE LONG TERM
Dalio emphasises that these emergency measures cannot continue for ever. They become counter-productive and undermine the very growth and social welfare they were meant to support. The only way to achieve sustainable growth that will bring the social welfare and human development we all crave, he argues, is long-term productivity growth. Recessions come and go, bubbles form and burst, jobs are created and destroyed, governments borrow and spend and then lurch to austerity. Productivity determines the long game.

Also, productivity-induced growth takes care of debt. It is much easier to repay debt through growth than austerity.

The need for long-term productivity growth takes us straight to ‘structural transformation’.

WHAT IS ‘STRUCTURAL TRANSFORMATION’?
This has become a catch-all phrase meaning different things to different people. For some it is about different fiscal and monetary policies; for some about changing labour laws; for some about privatisation and deregulation. Overall, it is darkly associated with the IMF and its SAPs or ‘structural adjustment programmes’, feared by some and desired by others.

For us, structural transformation simply means changes in the economy that will generate higher productivity.

THE TREASURY DOCUMENT ON GROWTH
Many easy wins on higher productivity are identified in Treasury’s much-discussed Growth Paper. This 100-page document covers five main areas of reform, with almost 100 action steps across those five areas. (The original is available on the Treasury website; readers who are interested are welcome to request the list of 100 actions that we have extracted from it.)

The five ‘key growth reforms’ are:

A sixth area is a stable macroeconomic framework. Currently, this is focused on the emergency measures to ameliorate the humanitarian crisis and counter-economic contraction. However, as we move beyond Covid-19, government will again have to provide a path to fiscal consolidation and monetary stability. Budget deficits of 10 % and a 90% debt-toGDP ratio on a permanent basis are not going to do it.

The structural change actions mentioned in the five key growth areas fall into two different categories. About half of them boil down to improving and strengthening existing programmes, eg launching a national water conservation programme or enhancing the Tourism Safety Initiative with visible policing. That is not structural reform. Structural reform comes into play with proposals like spectrum allocation, giving third parties access to the core rail network, or transforming electricity in South Africa. It is about productivity improvement.

WHAT DIFFERENCE WILL IT MAKE?
Modelling done by Treasury indicates that structural changes in the five key growth areas can lift South Africa’s potential growth rate from 1,5% to 3,7% per annum over seven years, adding an additional one million jobs. That is not to be sneezed at. As usual, the 80/20 rule applies – the biggest contribution would come from three areas: telecommunications (spectrum allocation), lowering barriers to entry, and restoring confidence. An increase of 10% in fixed broadband penetration typically generates 1,35% growth in developing countries (a bit less in developed countries); a one-day reduction in inland transport times in Sub-Saharan Africa can lead to a 7% increase in exports. Treasury did not model changes in electricity/Eskom or infrastructure, a particular priority for the President. In previous newsletters we have outlined the enormous contribution that electricity reform can make to growth (see our notes of 17 March and 12 December). It is now clear that the reorganisation of Eskom and electricity will proceed as set out by the President. (See André de Ruyter’s very significant interviews on Daily Maverick.) Treasury’s proposals, electricity reform and infrastructure can certainly bring South Africa back to growth. It is easier to repay debt through growth.

THE POLITICS OF IT ALL
Structural change always creates winners and losers. This is clear in electricity, where renewable energy producers are the winners and some coal providers the losers. The losers will oppose and object. Change also disrupts patronage networks, creating another source of opposition. But we believe that the train of structural reform has left the station, pulled at least partly by the Covid-19 locomotive.

In the February budget speech, the finance minister said government had ‘embraced the ideas’ in the Treasury document and that these were now ‘the basic and fundamental pillars of (government’s) approach’. After the Moody’s downgrade in March, the President said South Africa must now move on structural reform. Last night he reiterated the ‘… speedy implementation of economic reforms…’. The civil servants who did not get salary increases in April, as well as the refusal of more money for South African Airways and SA Express are early indications of seriousness on reform.

Energy/Eskom will be restructured; spectrum allocation is in progress (the ICASA deadline is November); the Infrastructure Fund will start operating this year; and, beyond our borders, the Kazungula Bridge between Botswana and Zambia will open this year, replacing a ferry and cutting transport times dramatically – which will support exports and trade. These are all structural reform measures that are boring but important.

A WORD OF CAUTION
Most of the 100 action steps listed by Treasury are also in the National Development Plan of 2012. Eight years have passed, and these steps are still on an action list. There is no shortage of plans and ideas. The shortage lies in political will and the capability of the state. There is ample evidence that the political will now exists.

The biggest obstacle to change is simply the lack of capacity in parts of the South African state. Building a capable state is a huge challenge – it is also one of the President’s seven priorities. But it will take time, make no mistake.

About the author: JP Landman is an independent political and economic analyst who consults to Nedgroup Private Wealth (Pty) Limited`s investment and research team. All views are his own.

Let us help with your will and estate planning
June 2, 2020

Binary thinking, What-Ifs and why it helps to disagree with yourself
May 19, 2020
Go to Top