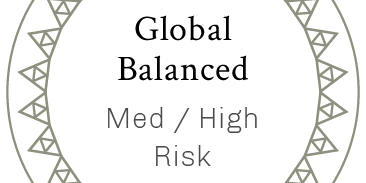 South African businesses have a strong history of successfully expanding their operations offshore and becoming well renowned global businesses. This has been done to access growth opportunities in offshore markets and to diversify away from a lower growth and higher risk domestic environment. While some companies have achieved success in their offshore pursuits, there are many that have struggled.

In this article we take a deeper look at two of these businesses, Woolworths and Sasol, and explore what lessons we can learn from their failures by relating it back to how we make our own investment decisions.

Woolworths: Paying too much
Woolworths is a classic example of a successful South African business that made a bold move offshore and struggled. In early 2010, the business was in a very healthy position and its management had a good reason to be confident. The business was growing; costs and inventories were being managed well; they had lots of cash available; and profits were up. They were also gaining market share in new high growth areas like online and food retail and their shareholding in the high-end Australian clothing brand, Country Road, was
contributing nicely to their bottom line.

At the same time, the retail environment was changing with the growth in online retail, consolidation in the industry and the arrival of international retailers like Zara and H&M in 2011 and 2015, respectively. Local retailers had to innovate and build scale to remain globally competitive. Woolworths identified Australian listed retailer, David Jones, as an ideal opportunity to do just that, creating a “leading retailer in the Southern Hemisphere”. This was unfortunately where their fortunes changed. While the rationale to go offshore and expand into a region with a common fashion season made sense, the execution of the strategy was found wanting.

In our view, there were three main challenges with the acquisition:

Initially the acquisition looked like it was the right decision as Woolworths seemed to be doing well. As shown in Chart 1 below, revenue (the green dotted line) and operating profit[1] (the red dotted line) continued to rise in the years following the acquisition. However, operating profit could not keep up and started declining by 2016. Furthermore, they now had to deal with significant debt, which increased from less than R1 billion in 2014 to around R16 billion two years later.

The enormous debt burden and the realisation that the business may have spent too much on an underperforming asset weighed on the share price. Their woes were exacerbated in 2018 when Woolworths started writing off[2] their investment in David Jones. Between 2018 and 2019, Woolworths had to realise R12 billion in losses from writing off their investment in David Jones, equivalent to 60% of the initial purchase price.

Compared to 2014, Woolworths is now less profitable, has 16 times more debt and the share price is down 57%. Ian Moir was replaced as CEO of the group in February 2020 and moved to Australia to run David Jones.

Sasol: Betting the farm
While Woolworths’s issues began with an ambitious offshore acquisition, Sasol made a significant investment in the Lake Charles Chemicals Plant (LCCP) project in Louisiana in the US. The project commenced in 2014 with an expected completion date of 2018 and included the construction of an ethane cracker[3] and six downstream chemical manufacturing facilities. While Sasol’s existing energy and chemicals businesses were performing relatively well in a difficult operating environment, their revenues remained exposed to movements in the oil price. The LCCP project provided Sasol with the opportunity to grow its chemicals business and diversify away from oil. However, the cost overruns, delays, and ballooning debt from the LCCP project, have taken a significant toll on the business over the last few years.

Once again, we have identified what we feel were the main problems with the project:

As we can see in Chart 2 below, prior to the investment in 2014, Sasol was a very healthy business. Debt levels were low, while revenue (the green dotted line) and operating profit (the red dotted line) were rising. However, progress on the LCCP project started to stall in 2016, which led to Sasol revising the total expected costs of the project to $11 billion and then again to $12.9 billion in 2019, while the estimated completion date was delayed to 2020.

To make matters worse, the fallout from COVID had a material impact on the already strained business as oil prices plunged, which led to concerns around Sasol’s ability to repay its debt. The market value fell to a low of R23 billion at the end of March 2020, while debt ballooned to over R160 billion. Sasol recognised the deteriorating outlook of its investments by writing off R111.6 billion across the business in 2020, including R72 billion from the LCCP facility. They also undertook to sell a 50% stake in some of the units at the LCCP project to reduce their debt burden.

Sasol’s operating profit is down 73% while long term debt is up 600% since launching the project in 2014. The result has been a significant decline in the share price. 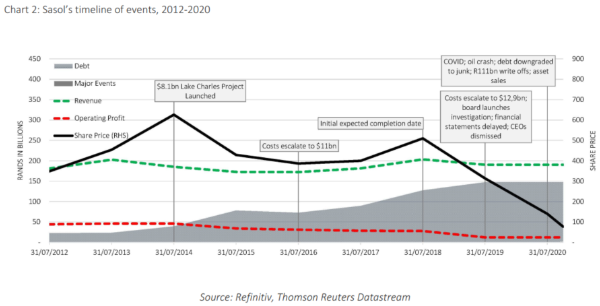 So, what can we learn from these two examples when deciding to invest offshore?

Having offshore exposure is an important part of an investor’s portfolio given the range of opportunities on offer. However, the exposure needs to be suitable to the investor’s long-term needs. We believe it is important to commit to a financial plan that addresses risk and return objectives and the investment horizon, to help prevent overallocation, poor timing, and mitigate single event risk by ensuring adequate diversification.

We hope you enjoyed this piece by Fund House.

[1]  Operating profit is what investors are left with after deducting all regular business expenses.

[2]  Companies record the value of their investments as realistically as possible and adjust when their outlook changes. The adjustments are recorded as gains or losses in the financial statements

[3] An ethane cracker turns natural gas into ethylene, a component used in the production of plastics, resins, adhesives and other synthetic goods.

OF COVID AND THE VIRTUES OF CAPITALISM
December 15, 2020