Are Your Retirement Funds Safe? 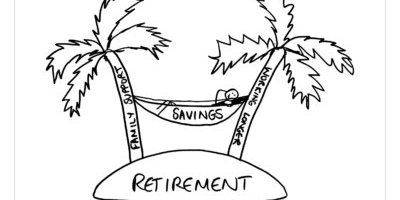 There has been a lot of fear mongering by the media and by those with agendas around the matter of policy reforms regarding Retirement Funds. Below we are sharing an article and response from Allan Gray’s team which provide a lot of clarity.

Reports that the government plans to compel pension funds to invest in state assets and projects have understandably caused alarm among investors, spurring many questions. However, according to the ANC’s economics chief, Enoch Godongwana, the party is moving away from the idea that prescribed assets be used as a policy tool. How do you make sense of these conflicting reports? Sandy McGregor provides some much-needed context and tackles this question.

There is general agreement between business, the government, and the ANC, that boosting infrastructural spending is both necessary and an appropriate way in which to get the economy growing again. Some parties to this discussion believe that in its current form, Regulation 28 of the Pension Funds Act – which stipulates the assets that retirement funds can invest in – is too restrictive. They believe it needs to be changed to give pension fund trustees greater freedom to invest in infrastructural projects.

While greater clarity and flexibility is always welcome, changing Regulation 28 is probably unnecessary. Pension funds are already investing in infrastructure through debt securities issued by parastatals such as Eskom, Transnet, the Trans-Caledon Tunnel Authority (TCTA) and the South African National Roads Agency (SANRAL). The discussion about changing Regulation 28 is therefore the wrong discussion. The problem is not – nor has it been – the availability of funds, but a lack of suitable projects. During the past decade, state institutions tasked with infrastructural development have been crippled by gross mismanagement and endemic corruption. Most public sector institutions have become uninvestable without a government guarantee. By way of contrast, where the private sector was allowed to take the lead, such as in the mobile phone network, renewable energy, commercial property and private housing, there has been significant continuing investment for which finance has been readily available.

There have been articles dealing with a proposal contained in the Draft Taxation Laws Amendment Bill 2020 published at the end of July. This is Allan Gray’s legal team’s response…

The proposal is to change the trigger for a SA tax resident to withdraw from their RA and Preservation Funds. Rather than it being tied to emigration, it is proposed to be tied to the cessation of tax residency where the member needs to have remained a non-SA tax resident for at least three consecutive years.

It is only a proposal i.e. it is not yet law and must still go through the normal consultation process with National Treasury. The proposed amendment to the retirement fund (RA and preservation fund) definitions was introduced in response to the Budget noting the phasing-out of the concept emigration

This is only the first draft of the Tax Amendment Bills which will be followed by industry comments and both industry and public consultations. There is therefore a way to go until this becomes law and it may change between now and when the Bill is enacted. SARS indicated they are still in the process of clarifying how this will work in practice and their guides will be updated accordingly once it has been clarified. We expect to receive more information on this as SARS works through the practicalities and refines how the process will work.

We unfortunately cannot advise clients how or whether to act on this proposal, but for now, the current law still stands i.e. withdrawal is linked to emigration for SA tax residents till at least 1 March 2021..

See extract from the TLAB 2020 Explanatory Memo where this proposal is summarised: 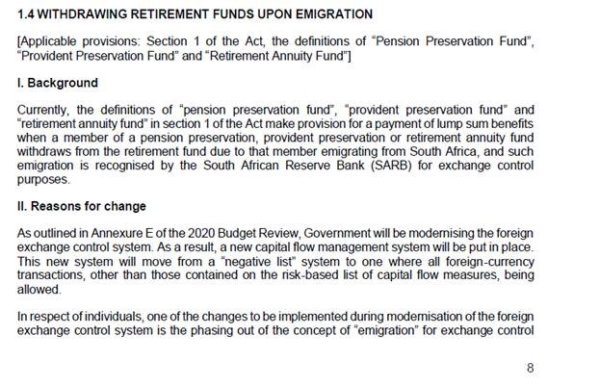 We hope this information will help you understand the landscape better and dispel some of the myths.